The year 2022 officially marks 12 years since Circle CRM Group was formed. But did you know Circle’s story also includes the story of Altamira Consulting Ltd? I know what you’re thinking… What? Who? But I’ll do you one better. Before there was Altamira, there was the Alberta Archaeology Company, which was founded in 1994 in Edmonton by archaeologist Bruce Ball, following a 10-year stint with the Archaeological Survey of Alberta. When he wasn’t doing archaeology, you can bet that Bruce was drumming or practicing photography. Truly the definition of jack of all trades. In 1997, Bruce won a contract doing desktop assessments through the BC government for BC foresters. With that, he started a BC-based consulting firm, cue Altamira Consulting Ltd’s entrance. Suppose somewhere inside your mind you think that the name Altamira sounds familiar. You might be thinking of the caves in Spain called Altamira, which date to the Upper Palaeolithic (about 35,000 years ago). Many people assume that’s where the company name came from, which is partially true. When providing three possible names for the company, Bruce chose Altamira as the third option, not because he was thinking of famous archaeology sites, but as the musician he is, Bruce was recalling the song lyrics from Caves of Altamira by Steely Dan.

A wooly man without a face

And a beast without a name

Can you see what has been done?

– Caves of Altamira by Steely Dan 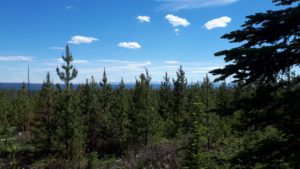 Shortly after starting Altamira, Bruce headed to a forestry cut block with a forester. At one point, the forester pulled over, and Bruce went to lay his head against the truck window for a few minutes. When he looked down, he saw the track they were on was littered with dacite flakes, the remnants from biface and other tool manufacture. Stepping out of the truck, Bruce noticed similar artifacts everywhere he looked. Every size and shape of flake, every stage of core reduction and tool manufacture was just laying at his feet. Unsurprising, really, given that they were on the flank of…ARROWSTONE MOUNTAIN 🤓. Further investigation revealed they were at the site of a large quarry for dacite, a volcanic rock commonly found on archaeological sites in the BC interior. The projectile points they found showed that the site was in use for close to 10,000 years. What a way to start off a new company! Years later, Altamira conducted an HRIA along Highway 63, north of Fort McMurray. Betcha didn’t know that road to the north had thousands of artifacts below it! The company continued to grow, and by the mid-2000s, Altamira had a small but dedicated staff with a few Alberta permit holders, two or three BC permit holders, as well as a full-time GIS technician and a technical writer plus field staff. 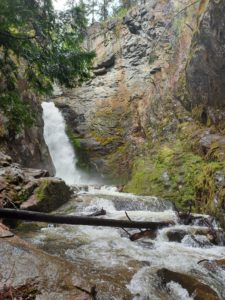 Over the years, more than 20 permit holders worked for Altamira, and between them held 331 permits in Alberta and 180 permits in British Columbia. Margarita was introduced to Bruce in the fall of 2010, and as luck would have it, Bruce was starting to think about retiring. Margarita did a bit of work for Altamira that year, and in the next few years, even as Circle CRM continued to grow, Margarita filled in as a permit holder for Altamira. At this time, Circle was mainly providing services to oil and gas clients, alongside smaller developments such as subdivisions and municipal infrastructure. By the late 2000s, Altamira provided archaeological services to several forestry companies in Alberta and BC. Working alongside Altamira allowed Margarita ample experience working with these forestry clients, which was (and still is) a niche market for archaeological consulting firms. In 2014, retirement was beckoning for Bruce, and Circle purchased Altamira in early 2015. Suddenly, Circle’s workforce more than doubled and had offices in Calgary, Edmonton and Williams Lake. Bruce is happily retired from archaeology and loves to spend time with his grandkids and dogs, enjoying playing drums with his band, drinking fine wines, and growing massive potatoes in his garden.

Most of our clients know that we provide heritage

Fun Fact! One of our senior archaeologists, Trevor

For this Mother’s Day, we ask the moms on our cr

I don't know about you, but we're happier about th

Spotted 👀 Check out this good-looking crew that

Sometimes there's no place else to go but up! Chec

Yesterday, @margdeguzman was the host of an intima

@amandolin.wong started with us as a GIS Practicum

We're happy to share that Circle CRM is a Platinum

Since 2018, Circle has hosted a multi-day event to

Happy Earth Day 🌳 ! We are forever thankful for

We certainly feel that the ability to clone onesel

Looking for more information about our internal de

How do you hunt for Easter Eggs? We've opted for a

Team Circle CRM has been busy with some spring kic